Mehul Davé is an accomplished executive, serial entrepreneur, and thought leader with more than 35 years of success in the printed circuit board industry and others. In his current role as CEO of Entelechy Global, Inc., Mehul has been responsible for developing a highly talented and dedicated team of CAM engineers who deliver high quality, high touch services to customers throughout North America, Europe, and Asia.

Given his extensive background in software and systems at Cimnet, his team focuses on helping PCB companies with solving their front-end engineering problems. Providing on-demand capacity, automation, fast turn-around, reduced costs, better quality, and building redundancy are some of the pain points that Entelechy solves for their customers.

Mehul holds a B.S. in mechanical and aerospace engineering from the Illinois Institute of Technology, an M.S. in energy and environmental systems from the University of Illinois, and has completed coursework towards a Ph.D. in space physics at the University of Michigan. Mehul was inducted into the Chicago Area Entrepreneurship Hall of Fame, received the Ernst & Young “Entrepreneur of the Year” Award, and has been featured in over 100 publications in technical and trade journals.

The Big Picture: Part 2, Geopolitics and the PCB Supply Chain

Since my last column on this topic was so popular, I figured I should double down on it. If you’ve been living under a rock, let me tell you, stay there! China is currently undergoing a spat of power issues due to a perfect storm of trade feuds, electricity price capping, insane coal prices, and high consumer demand. Hold on to your mast because this one’s going to be a wild ride.

China has improved by leaps and bounds over the last 50 years to increase its infrastructure to cater to a global export economy. I remember going to Shenzhen in the early ’90’s when it was still predominantly rice paddies and “‘small”’ villages. Three decades later and it has become one of the most technologically advanced and bustling cities in the world. That also goes for most of the rest of eastern China. As you may well know, during one of the greatest migrations of the 20th century, millions of rural farmers migrated to the up-and-coming coastal cities, creating some of the most urban dense real estate on the planet.

Unfortunately for China, and consequently the rest of us, it doesn’t matter how advanced your cities are if you can’t power them. Their growth in modernization and population has outgrown the pace at which infrastructure and manufacturing can keep up. Just this past week, over 19 provinces across China experienced state mandated power cuts. Hotels, households, small businesses, and even factories and shipping ports are being forced to turn their power off. Most notably, Taiwanese-run factories supplying Apple and Tesla have ceased operations. The Chinese authorities are forcing millions across the country to curb their usage, turning them to alternative energy sources such as diesel generators, while coal plants shutter under New York-style rent control pricing, effectively prohibiting their ability to function in any sense of the word "capital." It’s become so bad that people can’t run their dishwashers and elevators are being closed to conserve power.

Xi Jinping and the ruling party have pinned this crippling issue on 21st century self-imposed carbon emission mandates, and while China seems to be taking strides toward meeting those, I have a hard time believing China would cut its arm off while trying to feed itself during a famine. In all actuality, China’s power output has increased by 10% year over year to meet increased demand, but they still can’t keep up. Chinese nationals are buying home goods and electronics at a pace never seen before, and with the rising demand for aluminum, cement, and steel (the most energy intensive products in China), you’ve got yourself the perfect storm.

Most of the blame falls on rising coal prices, as they surge amidst high electricity demand and reduced output with an ongoing trade dispute between China and Australia. Ever since their petition to commission an official investigation into COVID-19, Australia has had quite the relationship with the ruling party. Being the number two global exporter of coal, combined with China’s local coal mines experiencing down times due to new safety mandates, the price of coal futures has doubled. 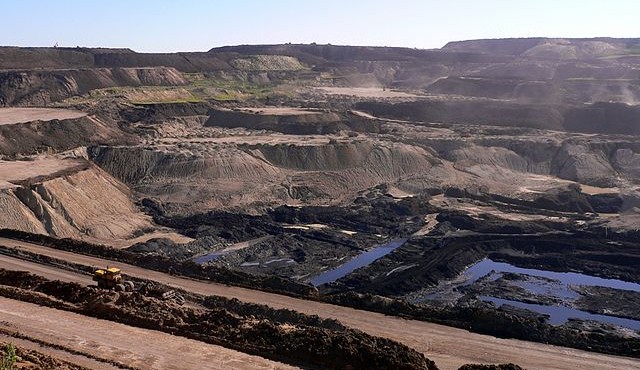 Currently, outside of China’s largest ports sit over 242 container ships, waiting to be stacked with cargo bound for Western shores. While container shortages and shipping shortages have plagued exports in the past, these factors have further been confounded by the power cuts, which have reduced the ability of dock workers to load and stock ships at their usual 24/7 pace. Of course, we all know this means an increase in shipping prices. What used to be $1,200 to $1,500 per (40-foot equivalent unit) FEU today fetches $20,000 a pop. 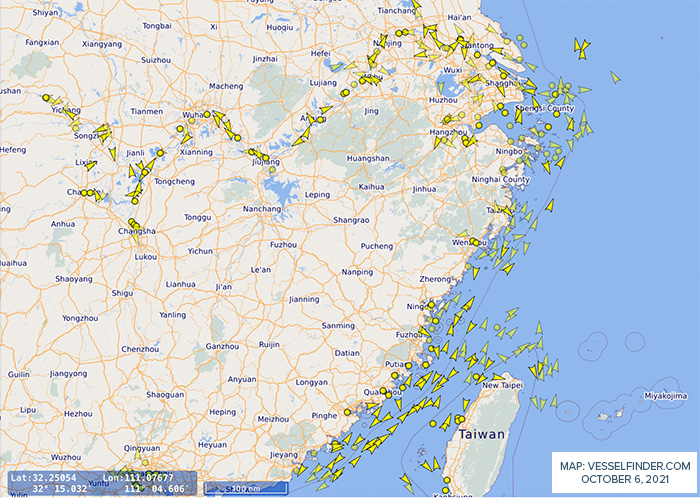 Shift over to the West and it’s not much better. L.A. and Long Beach have over 70 ships offshore waiting to be offloaded, workers hindered by myriad of problems, most notably a lack of delivery trucks and freight trains—we just can’t seem to hire enough people. I have my own views on our government paying for people to sit at home, but that topic can wait for another day. 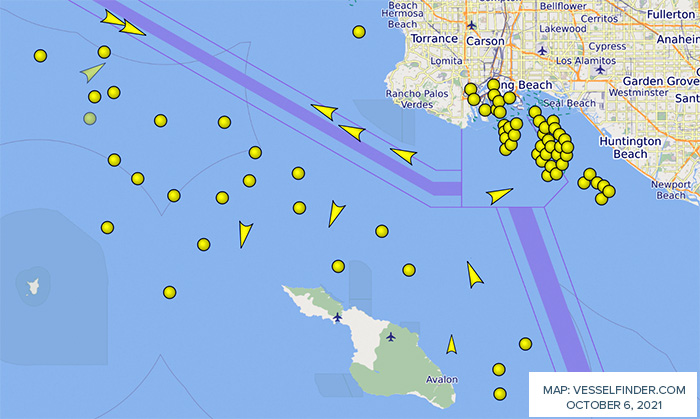 Which brings me full circle in this column. Adding to the other supply chain issues stemming from China already straining our industry, if you can’t produce the power required to run the ports to transport your goods and ease shipping backlogs and factories that are being closed due to power shortages, then you’ve found yourself up a creek without a paddle.

Hopefully China gets its power situation figured out sooner than later, because we’re sure to be feeling it where it truly hurts in the months to come.

The Big Picture: Part 2, Geopolitics and the PCB Supply Chain

Since my last column on this topic was so popular, I figured I should double down on it. If you’ve been living under a rock, let me tell you, stay there! China is currently undergoing a spat of power issues due to a perfect storm of trade feuds, electricity price capping, insane coal prices, and high consumer demand. Hold on to your mast because this one’s going to be a wild ride.

The Big Picture: Geopolitics and the PCB Supply Chain

As the PCB industry made its way to China starting in the mid-1990s, I followed the herd. It was a good move as I ended up with some of the largest PCB companies in China as customers and got to know so many more people in Asia. The shift to Asia, and specifically China made a lot of sense at the time.

The Big Picture: Globalization—Imagine a United States That Isn't United

What if the U.S. was fragmented with 50 state fiefdoms, each with their own rules and barriers blocking the free flow of goods and services across state lines? We cannot even imagine such a scenario, yet that is exactly what’s happening—fortunately not across state lines, but across global borders. Mehul Davé advocates for starting the hard work to get globalization back on track.

Globalization was in trouble even before the pandemic. The decades-long open system of trade that dominated the world economy has been damaged by the financial crisis and—more recently—the Sino-American trade war. Mehul Davé explains how COVID-19 has added a third-body blow to globalization.

In Mehul Davé's last column, he spoke to the challenges of tariffs and alternate sources for PCBs and the larger divide between the U.S. and China, potentially leading to far broader implications for U.S.-led vs. China-led technologies. The world has changed dramatically since then. Mehul explores how the COVID-19 outbreak has impacted the rollout of 5G and relations between the U.S. and China.

The new year is upon us, so Mehul Davé started thinking about the main challenges his company and customers are facing as we enter 2020: tariffs and finding alternate sources for PCBs. Mehul shares his thoughts.

Cheap products and services from places like China and India are good, but giving up the position of being the top dog doesn't sit well with most people—especially when you have leaders around the world reminiscing about the past and wanting to make XYZ great again or something similar.

Can Do in CAM Outsourcing: CAM Engineering— Building Redundancy in Critical Areas

Many believe that outsourcing is wrong because it takes away from local jobs. That may be the case if this industry can find the talent level at a cost that they can afford, but this is not the case in North America or Europe.

‘Can Do’ in CAM Outsourcing: Improving Quality in CAM Engineering

In this series, Mehul J. Davé, CEO of Entelechy Global Inc., will address six ways in which a company can significantly benefit from outsourcing their front-end CAM work.

While having on-demand capacity, improved automation, and fast turn-around are critical to any front-end engineering operation, achieving those goals with a cost-effective solution is imperative. Electronics are constantly under cost-reduction pressures. Functionality, capability, and complexity increase while costs decrease.

Time-to-market has been the mantra for every successful technology company. The best among them have strong and integrated supply chains that march to the drum of the OEMs and EMS providers that bring that technology to market. A big part of that success, especially in North America and Europe, is the ability for PCB manufacturers to turn around complex PCBs very quickly. The hallmark of PCB production in these higher-tech, higher-cost regions is flexibility and responsiveness.

As volume production in PCB has shifted significantly to Asia, manufacturers in Europe and North America have been focusing on high technology, quick-turn, prototype, and lower-volume production.

A Case for Outsourcing CAM Engineering

In the West, outsourcing is sometimes considered taboo and many believe it is one of the causes for shifting our manufacturing base to the East—specifically China and other lower cost Asian countries. In this series of columns, I will make a case in support of CAM outsourcing—especially for North American and Western European printed circuit board manufacturers.